The pictured license was issued by the state of Missouri in 1922 which provided the holder the legal right to hunt and kill African-Americans. 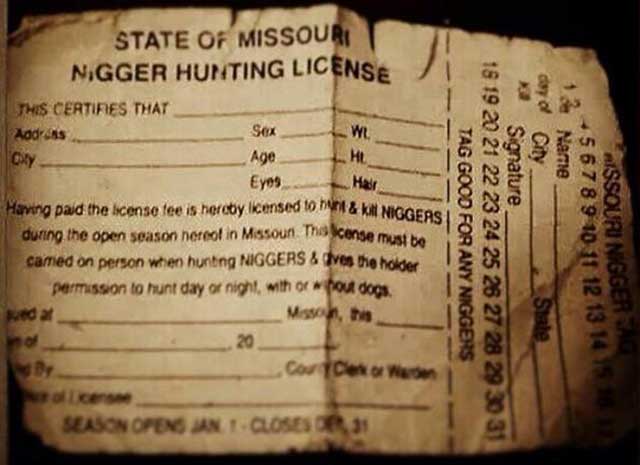 The text of the license reads:

Having paid the license fee is hereby licensed to hunt & kill N**GERS during the open season hereof in the U.S. This license must be carried on person when hunting, N**GERS & gives the holder permission to hunt day or night with or without dogs.

In 1995, the Washington Times wrote an article detailing some of the racist behavior at the Good Ol’ Boys Roundup of 1922. The article claimed that vendors at the event sold t-shirts with lynched African-Americans, African-Americans being drug behind tractors, as well as other racist items including “Nigger Checkpoint” and “No Blacks Allowed” signs.

WT said in their 1995 investigative report, that “nigger hunting licenses” were openly available in 1922 to a small group of white men for a high-premium.