Florida Woman Riding On The Backs Of Alligators

Many people in the popular tourist area of Shark Valley, Florida are mortified by a new recreational activity: gator riding. 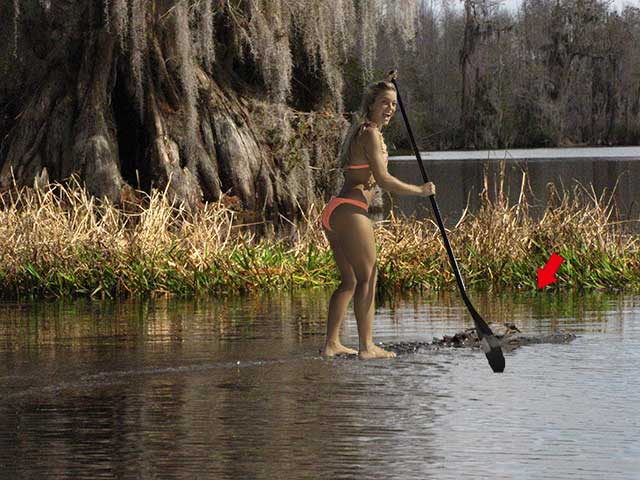 Stacy Williams’ boyfriend recently snapped a photo of her riding an alligator they have named John. She claims this is her twentieth ride on John’s back.

“John loves it,” Williams said. “He’s now to the point where he swims over to me like a taxicab when I arrive and I just step on. He can really get moving. I’ve fallen off a few times, but I have a great oar for balance and never fall now.”

Even though many claim the alligators seem to love being ridden, the picture is not that rosy. In the past month, two young men have been attacked trying to ride alligators, one losing his arm and leg.

“The dudes who got attacked are obviously dumb,” Williams said. “You need to ease into this sport. First spend time on the banks talking to the alligators in a soft gentle voice, almost like you’re talking to a baby. Let them get used to your voice. Once they know who you are, their defenses go down, you can approach them, and eventually step on their backs and go for a sweet ride. Alligator riding is a great workout too. Really works your core.”

It’s estimated that at any one time you can see up to thirty alligator riders on the most popular swamp lake.

A local resident said, “It’s just a matter of time before somebody gets eaten. Alligators are not paddleboards.”