Ted Parsons was taking a leisurely stroll down Canal Street at 10 pm when a six men attacked him. 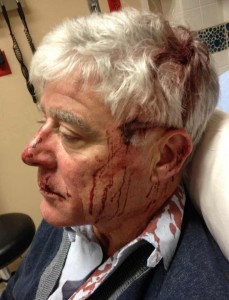 “I was down on the ground before I knew it. They were kicking and punching. One guy was shrieking and trying to pull out my hair. They were hurling a dictionary of insults at me: ‘heterosexual-trash,’ ‘breeder,’  ‘pussy-lover,’ tit-sucker,’ ‘straighty,’ and plenty of others expletives I can’t remember.”

“They were gone in less than sixty seconds.  I craned up my head and saw one guy dressed in a purple, I guess you could say velvety suit, with pink cowboy boots and a feathery black boa wrapped around his neck, run around the corner of a building. I didn’t see the rest. But there were about six.”

Mr. Parsons called the police and recounted the story as EMTs tended to his wounds. Police were skeptical at first when Parsons said he thought they were gay guys, but he managed to convince them.

“I don’t mean to stereotype gay people. I have a daughter who’s a lesbian that I’m very proud and accepting of — but they had feminine voices. I believe one was walloping me with a ladies’ handbag. The way the one guy I saw was dressed. The anti-heterosexual slurs… they were clearly gay men. Why they picked me I don’t know?”

Police put out an APB to find the perpetrator matching Parsons’ description but no suspect has yet to be identified or apprehended.

“I’m not sure if this is considered a hate crime, but they clearly didn’t like that I was a heterosexual,” Parsons said. “I know if I beat them up for being gay, it would, without question, be an act of hate.”

Police on the scene were not able to speak clearly on the possibility of a hate crime being committed and deferred all questions to police headquarters.