John Carey had been married for nearly 30 years when one day he told his wife, Bernadetta, that he was leaving her for a stuffed unicorn. John met the stuffed unicorn through one of his daughter’s friends. 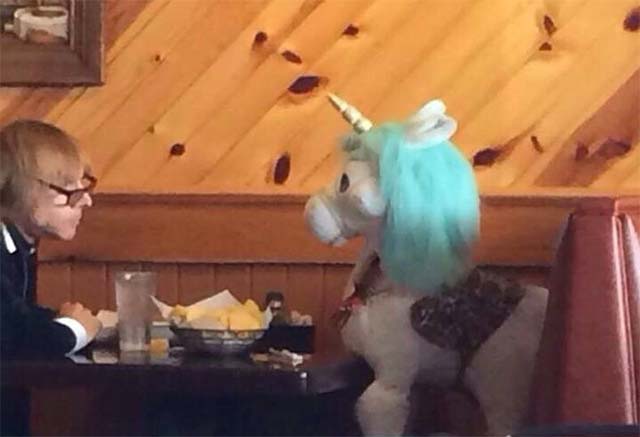 “Stacey brought the unicorn over for a sleepover, ” Carey told WRTZ. “And something changed in my brain when I saw that beautiful thing. While the girls were sleeping, I snuck the unicorn out and took her for a long walk out under the stars — we made out on Bluff’s Point.”

After their midnight rendezvous, John hid the stuffed unicorn in a garbage bag and told his daughter’s tearful friend that he had seen it fly away.

A week later Carey broke off the marriage with his wife. Now he is often spotted around Omaha with his new life partner.

“He comes into the restaurant all the time, ” a waitress for Sherry’s Cafe said. “He talks to it… “Who’s my pretty girl?” “I love you more than you love me.” “Who wants a kiss on the lips?” It’s creepy, for sure, but most of us have grown accustomed to it.”

John and his stuffed unicorn live in a tiny studio apartment. He claims they have an active sex life and they eventually plan to marry.

“And upside most don’t consider,” Carey said. “Is that she costs nothing. Bernadetta is overweight and cost a lot to feed and she shopped a lot. The unicorn requires nothing except my love.”