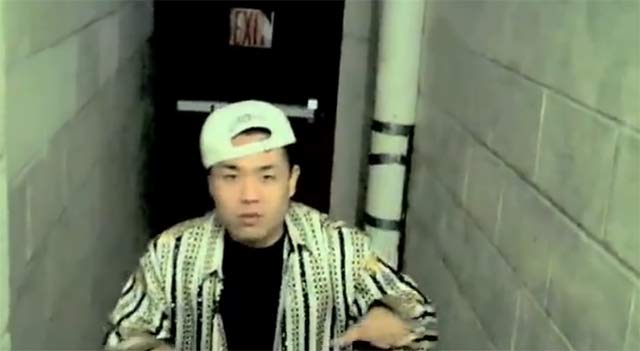 When growing up Leather Face had zero access to American music until a friend smuggled in assorted hip hop MP3s into North Korea on a thumb drive. That led him and other friends into becoming what is thought to be North Korea’s first rappers.

“I heard these black peeps making their words rhyme and it opened up a new world, holmes. All I’d knowed up until then was starvation and having to stay inside my house and worship the dictator, but after I heard this music made by American blacks I started practicing and I got better and I felt free. I busted out song after song and my little sistas loved it, so my pops and my moms. And after I compared my rap to black American rap, now I say black Americans can’t rap.”

He then discovered Bruce Springsteen.

“White people sucks dicks at rap, so I don’t even bother with white rap. Not hatin’, just sayin’. You gotta have some color to your skin to win. But I like Bruce Springsteen. That dawg got bark. He’s an inspiration to my struggle and that’s why I used him in my song ”

Leather Face has a single demonstrating his self-pronounced rap skills sung to the tune of Springsteen’s “Born in The U.S.A.” Have a listen: