Weird and Stupid Laws by State

Did you know in Aspen, Colorado it’s illegal to start a snowball fight?

Check out some of the strange, archaic, and just plain weird and totally stupid laws that are still in effect in states across the country. 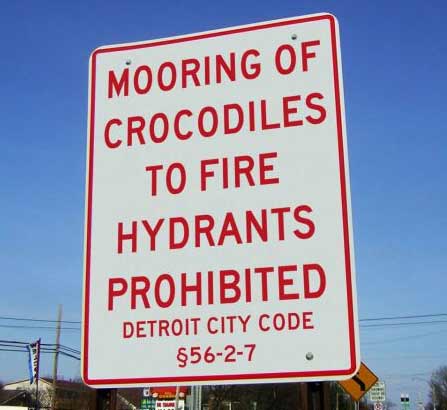 Oklahoma
It’s against the law to use a yo-yo to go fishing.

Alabama
They outlawed bear wrestling. If caught you will be fined and your bear confiscated.

Alaska
It is illegal to get drunk in a bar and stay there.

California
In the sunshine state they prohibit the eating of frogs who have died in frog-jumping contests.

Delaware
They banned the selling of fur of any domestic cat or dog. Unfortunately you will have to travel to another state to buy your dog fur coat.

Georgia
Says you’ll be in big trouble if you sell the tail of the squirrel you recently shot. Don’t do it or you will pay a $10 fine.

Idaho
Idaho has a Donner Party type law. Cannibalism is punishable by up to 14 years in prison, however, it is ok to “willfully ingest the flesh or blood of a human being” if it’s a life-or-death situation. This is a law I can get behind.

Indiana
Says if you’re in a liquor store and get a craving for a chilled water or soda, it ain’t gonna happen. Liquor Stores are unable to sell cooled water, soda, and milk (but you can, THANKFULLY, buy it at room temperature). Who doesn’t love their milk at room temperature?

Kentucky
Wants to stop wannabe legislators, public officers, or lawyers from pursuing their careers if they have previously engaged in dueling with dangerous weapons.

Maryland
Demands you keep your home clean and tidy or you can serve up to six months in jail.

Mississippi
This is a bunch of BOOOOLLLshit. They will fine you $100 dollars if you use profanity in public with two or more persons present.

Nebraska
Unfortunately they don’t like STD carriers. If you currently have herpes, The Clap, or… God forbid, AIDDDS!! or any other venereal disease you will be banned from getting married.

Nevada
They sure got this one right. It is illegal to use an x-ray to determine the shoe size of an individual.

New Mexico
This law isn’t strong enough. According to the New Mexico Constitution, “idiots” are not allowed to vote in state elections. When this law was put into place, the term “idiot” was referring to someone who had an IQ below 30.

This needs to be redefined to anybody with an IQ below 100.

Oregon
Hunting in a cemetery is ILLEGAL in Oregon, Darn. I wanted to go skunk hunting in the cemetery this fall. Oh and you can’t pump your own gas because Oregon treats it’s citizens like children.

Pennsylvania
This law is kind of a shocker. In Pennsylvania it is illegal to barter for goods or services using a baby as the item being traded.

Vermont
It is against the law in Vermont for any individuals to outlaw clotheslines, thus protecting the rights for all citizens to dry their clothes outside.

Wisconsin
In order for a cheese to be state-certified, it must pass the requirements of being “highly pleasing” according to the Wisconsin State Legislature. Hear that Velveeta sliced cheese? You ain’t gonna get state-certified.