Marsha Lakey and her two sons planned a simple Florida vacation: shopping, building sand castles by the sea and eating at fun restaurants. However, the happy vacation quickly turned sour when Ms. Lakey was charged with injuring a protected animal. 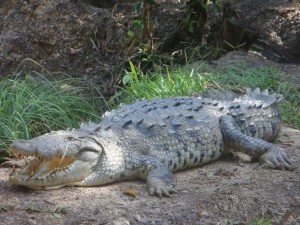 While crocodiles are prevalent in many parts of Florida, they are endangered in the St. Petersburg area and are therefore a protected species.

When Ms. Lakey and her children stumbled across an aggressively behaving eight-foot crocodile behind a beach dune she felt she had to act. Ms. Lakey, who weighs 350lbs, claims she jumped onto the crock, rear first, and broke its back.

“It wasn’t really moving well once I managed to climb off. I called 911 on my Iphone. And soon the police came and they didn’t seem to believe that I could have incapacitated such a big and aggressive and mean and ugly animal. I told them, even trying to act it out for them, how the crocodile was making a kind of hissing noise, clamping its jaws, and thrashing its head back and forth clearly wanting to eat my children and how I just attacked. The police didn’t really say much. They took my contact information and left.”

The injured animal was rushed by ambulance to an emergency veterinary clinic.

That’s when Ms. Lakey got a surprise knock at her motel door later that afternoon from a Federal Fish & Wildlife officer.

“First thing I thought when this man knocked was boy he’s handsome. He had a nice healthy trim of licorice black hair, broad shoulders, thin hips. I’ve been a widow for some time and he just looked great, especially in his uniform shorts. But I forgot all about his charming looks when he cited me for injuring a protected animal. I broke the crocodile’s thoracic vertebrae he said and it would have to live the rest of its life in captivity. I told him it was self-defense, that it wanted my children, but he just told me to plead my case in court. What a load of crock I said without even realizing at the time that I was making a pun. He nodded curtly and told me to have a nice day.”

The United States Fish & Wildlife Service was unavailable for comment.