You hear about attacks on homosexual people all the time, but homosexual animals? Homosexuality apparently does occur in the animal kingdom, but the subject seems way off most people’s radars. 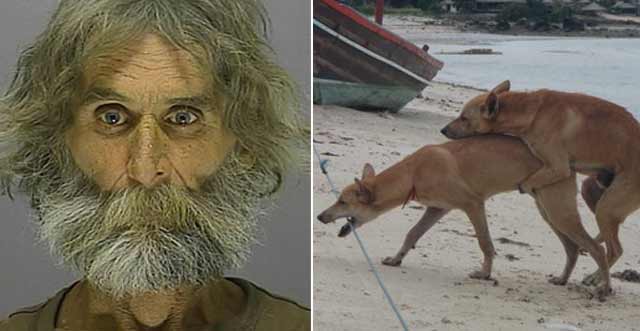 But apparently not off Jim Swanson’s. Swanson told police he had been watching “two gay male dogs” have sex on Makena Beach nearly every morning for the last six months. Swanson lived illegally in the jungle behind the beach.

“I don’t like gays,” Swanson said in the police report. “The anus is exit only, but if people and animals want to gay (sic) then do it behind closed doors. Although, I don’t mind womens (sic) being gay. I can watch gays womens (sic). These dogs should have taken their shameful business into the woods and hid under some shrubs, and I told them that all the time, but they didn’t care. They are proud of their homosexuality and want the world to see it. Sickos.”

A family vacationing from Michigan were playing on the beach when they saw arrows flying from the jungle and sticking into the sand around the dogs.

“We knew somebody was trying to hurt these dogs,” the witness said. “It was arrow after arrow and when the breeding dogs didn’t run, I knew it was just a matter of time before a dog was speared and injured or killed.”

The witness ran into the jungle, found Swanson with a cross bow and a stack of arrows and made a citizen’s arrest.

“It took both my wife and and my twin boys (aged 12) to keep Swanson detained,” the witness said. “He was extremely intoxicated and belligerently yelling ‘I hate gay dogs’ and ‘impeach Obama.'”

Police are currently holding Swanson, but have yet to formally charge him, although animal endangerment and illegal hunting charges are likely on the way.

To make things even more bizarre, police found 50 laminated photos of mating dogs in Swanson’s back pocket that he allegedly printed from the internet.

“We’re not certain what the [photos] are about and Mr. Swanson doesn’t seem to want to tell us,” an officer from the Maui Police Department said. “But it’s not a crime for the suspect to have these kind of photos in his possession.”

Swanson has no prior arrests.