MANNING, ORE. — CBS News reported that a 19-year-old told investigators he caused a three-car crash when he fainted while holding his breath as he drove through a tunnel northwest of Portland, Oregon. 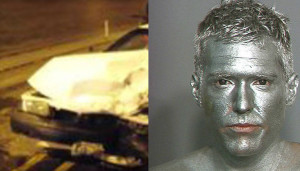 Daniel J. Calhon’s, of Snohomish, Washington, car, a 1990 Toyota Camry, drifted across the center line and crashed head-on with a Ford Explorer.

Calhon and his passenger, 19-year-old Bradley Meyring, of Edmonds, Washington, suffered non-life-threatening injuries, as did the two people in the Explorer: Thomas Hatch Jr., 67, and Candace Hatch, 61, from Astoria.

The four were taken to separate hospitals as a safety precaution as Mr. Hatch was taking swipes and threating to kill Calhoun with an Exacto knife. Police said Mr. Thatch will be charged with assault with a deadly weapon.

He gave an explanation for why he held his breath: “The whole deal is that if you hold your breath throughout the entire ride through a tunnel and can make it, a wish will come true. I’ve done it since I was a kid… it’s kind of like a superstition, I know, and I don’t think I’ve had a wish come true, but I keep trying. ”

Calhon was also painted silver and gave no verbal explanation as to why when probed. He made a zipper motion across this mouth which is common body language for my lips are sealed.