Man Has Baby Doll Surgically Implanted In His Body

Matt Miller suffers from a bizarre attachment disorder that compelled him to have a plastic baby doll surgically implanted into his body. A psychologist shed light on this unheard of disorder. 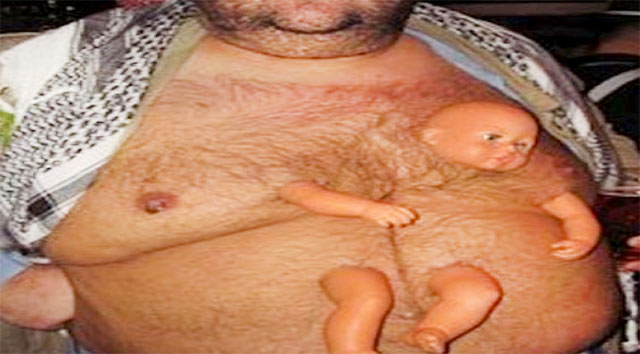 “We have people with castration desires, people that desire limb amputation. The impulses are almost always rooted in psychological trauma from childhood and that is what is behind this unusual case.”

Miller played excessively with dolls as a child and apparently he had a favorite named Amanda. His taunting big sister told him he was too big (16 at the time) to play with dolls and then she stole Amanda. This devastated Matt.

“He loved this doll, literally, like it was is own child, mother and lover wrapped into one plastic human form,” the psychologist said.

Last year Miller found the doll, hidden 32-years ago, in an attic. This drew more abusive teasing from his sister when she found him cradling the doll, “bottle feeding” it, calling the doll “my little ray of sunshine” and “sweetie pants.” She  told Miller she would not hide the doll this time, but decapitate the doll and burn its remains.

In a distressed, delusional state, Miller decided that nobody would ever take Amanda from him again and had the doll surgically implanted.

He could not find an American surgeon to perform the surgery, so he flew to Costa Rica where he paid over $50,000 for the one-of-a-kind surgery.

“I will do any surgery anybody wants as long as they pay in cash,” the plastic surgeon said. “I removed and attached a man’s penis to his tailbone last month. He wanted a tail, now he has one.”

Miller is on a special drug that helps the body not reject foreign objects, the same drug they give to brain, liver and heart transplant patients. Matt now reports he is healthy and doing fine.

“My sister will have to pull the baby from my body, literally, Miller said, “which would cause me serious injury and even death. Even though she’s a cruel ‘you know what,’ I don’t think she will do it.”