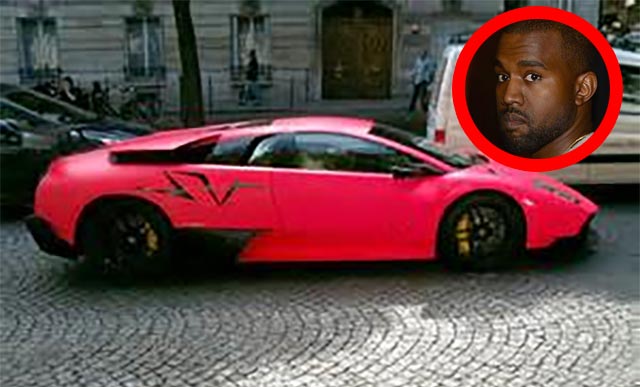 Last night Kayne attended the Dior fashion show with New Zealand pop star Lorde, but later, while leaving the Hotel Ritz Paris by himself in a borrowed pink Lamborghini, a fan asked Kanye if she could get a photo of her and the star in front of the exotic car.

Kanye reportedly denied the fan by saying: “Back away from my s**t, lady.”

Kanye was harassed by several paparazzi who asked him where he got the new car:

“It’s not mine, but I got plenty of nice cars,” Kanye replied with a big grin as he slid into the car.

Another fan asked for a ride in the car:

“What’s up with people wanting to ride in my cars all the time?” Kayne shouted. “People who don’t drive nice cars have empty lives. I mean that too. Go ahead and report that… I don’t care.”

He honked as he drove away to get more gathering fans to move, but had to stop again:

“Seriously, get off your ass****s, get some talent, make yourself into somebody like me and maybe you can have nice cars and stop living your pathetic existences. Ya’ll have a poverty mindset. I’m sick of poor people.”