A man entered a reptile zoo just outside of Waco and squared off with a monster-sized rattlesnake. John and Belinda Meyers took several photos, including one incredible close-up. 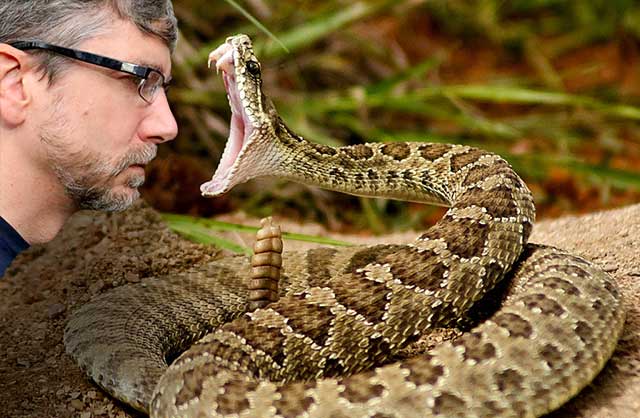 Above: Unknown man gets in rattlesnake’s face

“I thought this guy had to be high on bath salts or cocaine, but he didn’t act drugged-out,” Belinda Meyers told KHZT. “He acted tough. Even angry. He was just fearless. He got down in front of the snake’s face and said, ‘Bite me, snake. I dare you to bite me. Bite my face. Do it, snake. I dare you.'”

Sources say, the snake hissed a few minutes but did not bite the taunting man. The snake eventually slithered away.

“The guy yelled, ‘That’s right snake, go back to your hole, snake. Go home, snake. You’re not even a snake, you’re a chicken. A big pussy,'” John Meyers told a reporter. “He seemed to hate this snake. Maybe they have a bad history together or something we don’t know about. It was a very frightening experience to watch.”

After the encounter, the nameless man left the zoo offering no explanation.